What happens when a surrogate mother leaves behind a bereft husband and two small children? 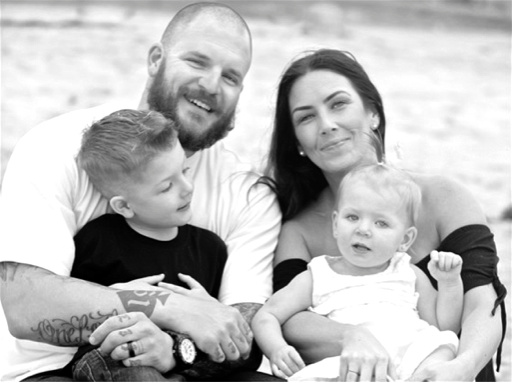 In early January of 2020, Michelle Reaves, a 36 year old mother of two who was acting as a surrogate for a second time for another family, died during childbirth, according to a Go Fund Me page created to help her own family. Described as a "mama, wifey, and beautiful soul," Michelle passed away due to complications while giving birth.

Michelle was in a hospital delivery room on the morning of January 15th when her condition took a turn for the worse.“One complication led to the next and she fought for her life,” Michelle's friend Jaime Herwehe wrote on the fundraising site. "Although the baby made it out safe, Michelle did not.” Family friend Andrea Axelson reported that Michelle "began hemorrhaging" while delivering a baby girl.

"Michelle has the best, most sarcastic, funny personality and always had you laughing," wrote Jaime Herwehe, a close family friend and the Go Fund Me campaign organizer. "Michelle and Chris have two beautiful kids, Gage and Monroe who my heart breaks for, knowing they won't grow old with their mama."

Axelson said Michelle and her husband, Chris, met in 2010 and had a loving relationship with two children.“They had a great marriage. They were that Facebook couple that you envy. He’s completely lost without her. It breaks my heart.”

“There wasn’t a day when Michelle wasn’t posting photos of her kids or some kind of relatable story,” Axelson said. “She was just awesome.”

The maternal mortality rate in the USA has been steadily rising—the only developed country where this is true.  The USA maternal mortality rate more than doubled from 1991 to 2014, and American women have the greatest risk of dying from pregnancy complications among 11 high-income countries.  Over 700 women die of complications related to pregnancy each year in the USA,  and an additional 50,000 American women suffer from life-threatening complications of pregnancy.  Black women in the USA are three to four times more likely to die in childbirth than white women.

In the mean time, surrogacy pregnancies, which we know to be far more dangerous than traditional pregnancies,  are continuing to rapidly increase.  The American Society for Reproductive Medicine reported a 30% increase in surrogate births in the USA between 2004 and 2006, for a total of 1,059 live births in 2006. Though few statistics are available, commercial surrogacy is increasingly prevalent in the United States, with the number of babies born to gestational surrogates growing 89% percent from 2004 to 2008.  Industry experts estimate that the actual numbers are much higher since many surrogate births go unreported. In a 2016 report published in the “Fertility and Sterility” journal, the author states that in the past 15 years, the number of gestational cycles increased by more than 470%, and a large majority of clinics—69.4%--now offer this treatment.

Multiple deaths of American women resulting from complications directly related to their surrogacy pregnancies have made it into the public domain in recent years. But although we know that tens of thousands of American women are now serving as surrogates in high-risk pregnancies, we have no means of knowing the total number of them who have died or will die, because the commercial surrogacy industry has ensured that such information never sees the light of day. The frequency of any of the many known harms associated with surrogacy will never be ascertainable because there is no requirement that health complications experienced by surrogates—or even their deaths—be tracked and reported.

Reproductive medicine is one of the fastest growing and most lucrative fields of medicine. But just like the tobacco industry, which for decades resisted research into health harms to smokers, the fertility business refuses to conduct research into the health risks to surrogate women and their offspring.  Even if a would-be surrogate were advised of all “known risks" involved in surrogacy pregnancies, her “informed consent” remains an impossibility, because the full extent of the risks she faces—although known to be heightened—is not fully understood.  The commercial surrogacy industry, like the tobacco industry, continues to have both the means and motive to deny or minimize the health risks involved in commercial surrogacy, and to misrepresent what the practice entails.