What happens when an infant is purchased to be trafficked to pedophiles for sex? 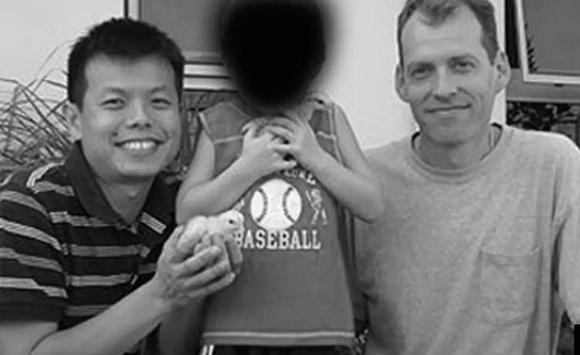 Mark J. Newton and Peter Truong were arrested in Los Angeles in 2011 and convicted there two years later, on charges related to their involvement in a child exploitation conspiracy involving their then six-year-old adopted son.

Both pleaded guilty after police discovered videos showing their son being sexually abused by two American men---a 35 year old a junior tennis coach from Michigan, and a 38 year old attorney from Florida.

In 2013, Newton was sentenced to 40 years, while Truong received a 10-year reduction and is serving 30 years, as a result of his cooperation with investigators.

The two men had entered a civil partnership in Australia and thereafter purchased a male infant from Russia in 2005, paying the infant’s mother $8,000 for the exchange. The infant’s birth papers were falsified to list Newton as his biological father, paving the way for the boy to be adopted and brought to the two men’s home in Australia.

In announcing Truong’s sentence, the US district court judge who presided over the case said that she took note of Truong's willingness to work with authorities to lead them to other pedophiles and his own history as a childhood abuse victim. Truong, who was linked to offenders around the world and was part of a much larger child exploitation conspiracy operating online and in secret for almost two decades, claimed that he too had been a victim of the same network of men. The network was called Tail of the Dragon and, at the time it was discovered by authorities in 2011, had about 20 core members located around the world. All had concealed their identities using multiple screen names and aliases.

Logs from the network’s chat room revealed that Truong was an active member up until he acquired his infant in 2005. After this time, Truong maintained communication with an even more private group of men around the world, sharing and trafficking his son with a network of child sex abusers who called themselves Boy Lovers. The network was a forum for men who describe sexual abuse of boys between the ages of two and ten as a form of consensual love between man and boy. One video uploaded to the network showed the Newton’s and Truong’s son performing sex acts on Newton with a disturbing level of sophistication when he was not even two years old. When the boy turned five years old, Newton videoed himself engaging in sexual activity with him on more than a dozen different occasions in one month alone. Chat logs showed how men in his network discussed how to acquire children of their own.

Truong and Newton evaded detection for six years, until a chance discovery exposed their depraved life and their pedophile network. In 2011, New Zealand authorities discovered images revealing that their son had been used in child pornography. The couple's house was then raided by authorities just after the men and their son had left for the US. Police seized computers, electronic equipment, and documents that uncovered high-definition video and images of child exploitation.

Others in the network were also arrested by police and charged with child sex offenses. For example, Edward De Sear, then a senior partner at top NYC law firm, was arrested and charged with distributing child pornography. Married with children, the attorney had traded thousands of extreme and often violent child pornography videos and images using a P2P network. Their online communications also show that Truong personally arranged for De Sear to access his son for sex on multiple occasions in Australia, America, and in Brussels, from when the boy was as young as four years old.