What happens when you, as an egg donor,
have a massive stroke one day after your eggs are harvested 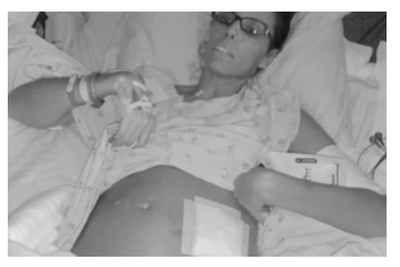 When I was 23 years old, my job following college wasn’t making a big enough dent in my student debt load, and money was tight. After reading about the benefits of being an egg donor in a magazine, and thinking it might be a great way to help me financially while also doing something positive for others, I signed up with an egg donor agency called “Giving Hope.” A few months later, I was told that a Canadian couple had selected me—anonymous donor #2327—and that my egg donation would take place in Toronto.

Shortly afterwards, I flew to Toronto for a single day to meet with a Dr. Ryan, a fertility doctor there who I was told would be the primary fertility doctor, and who gave me the medications I would need. I was given a vial of Gonal-F and syringes to inject myself over the next several days, and also received pre-filled syringes of Orgalutran to orevent premature ovulation. I began injecting myself that night, and a few days later, a monitoring clinic in Florida checked my response to the medication. The clinic reported to Dr. Ryan that I was having “an excessive response to the hormone stimulation,” and that I “was producing a large number of ova.” After receiving this report, Dr. Ryan instructed me to reduce my hormone dosage, and I did.

The following week, I flew back to Toronto to have an ultrasound, which indicated that my ovaries contained a large number of eggs. Dr. Ryan was very pleased with the results. He then gave me a final “trigger shot” of hCG to prepare my body for retrieval of the eggs.

Three days later, I was feeling a whole lot of abdominal pain. When I got in touch with “Giving Hope” to let them know about the pain, I was told that this was normal and not to worry. The following day, Dr. Ryan performed the egg retrieval and ended up harvesting 45 eggs. But later that same day, shortly after the retrieval, I began feeling very sick. I threw up in the elevator in my hotel, and continued vomiting on my two flights home. I threw up while boarding the plane. I threw up on the jet way. I threw up on both airplanes, and in between flights. By the time my boyfriend met me at the airport, he found me lying down on the carpet in the luggage hall, as I was too tired and sick to stand. It’s gross even thinking about it, but I was just that sick.

My boyfriend called Dr. Ryan that night, and twice the next day, describing to him my extreme nausea, pain and swelling abdomen. But Dr. Ryan insisted,  “She’ll be okay. Give her Gatorade. Give her the meds I prescribed. She’ll sleep it off.” When I woke from a brief afternoon nap, however, I began to worry that something was seriously wrong. When I reached for a bottle of Gatorade, I had no sensation in my  arm.  I saw me grabbing it but feeling nothing. I tried calling out to my boyfriend, but my words were slurred. When I discovered that I couldn’t walk, my boyfriend called the doctor one last time, but when he didn’t answer, my boyfriend called 911 and an ambulance was sent for me. I was taken to the Mayo Clinic Hospital in Jacksonville, Florida where doctors confirmed that I’d had a stroke. They also diagnosed me with severe ovarian hyperstimulation syndrome (OHSS), a complication of stimulating the ovaries, which causes fluid to seep from the blood vessels, making blood thicker and more likely to form clots. During my ten days in hospital, while being treated for my stroke, I also had several liters of fluid drained from my abdomen and from around my lungs, and was treated for “acute kidney injury,” requiring three blood transfusions.

Traveling from around the country, members of my family gathered at my bedside at the hospital. It wasn’t clear that I was going to survive. The doctors were saying they didn't know if I was going to make it. They were worried that my ovaries might flip or burst, and that I might bleed to death. There was talk of having to remove my ovaries.

And I suffer from memory loss—I struggle to find and recognize words, and my short-term memory, especially, is very compromised. For the past four years, I’ve tried to get pregnant, as my husband and I want very much to have a child together, but we’ve had no success. The doctors tell me that the hormones I took likely had a big impact on my egg production going forward, but they also think it wouldn’t be wise for me to take more hormones to re-stimulate my egg production.

I have learned a great deal since this experience.  When the egg donation procedure was described to me by Giving Hope, I was told that the worst I was likely to feel was some temporary bloating and discomfort.  They mentioned other things happened on very rare occasions, but didn’t elaborate.

But from the beginning, and unbeknownst to me at the time, there were clear warning signs that I was at risk that went unheeded. Dr. Ryan was told early on that I was responding excessively to the hormones before he did the harvesting. He lowered my dosage but didn’t cancel the egg retrieval, even when it became very clear that my egg production greatly exceeded normal levels. Normal egg retrieval in that process is six to ten eggs, and anything in the ten-to-twenty range is excessive. But the lab results documented that I had 45 eggs for harvesting, and I was therefore at immediate risk of ovarian hyperstimulation syndrome. The correct procedure at that point would have been to cancel the egg retrieval and stop any further stimulation. But Dr. Ryan went ahead with the harvesting and sent me home on a plane the same day.

I brought a suit against Dr. Ryan and Giving Hope, but I am not able to discuss many of the particulars that arose in the suit. I was paid for my silence, by agreeing to a confidentiality agreement as part of the settlement.  Confidential settlements are not good, as they force a desperate victim like me into a wrenching, corrupt bargain: much-needed remuneration at the expense of the public good. Confidential settlements undermine the justice system’s vital role of warning society about safety hazards, and thereby deterring unethical conduct.

I understand better now how vulnerable so many young women are who--like me at the time--are in financial need, and then see advertisements full of flowery language about helping make dreams come true, “giving hope,” and “making the impossible possible.” If, like me, these young women are even told about any risks or side effects, they are downplayed. Whatever information is given to the young woman who is selling her eggs is coming from a clinic with deep conflicts of interest. Egg donor clinics solely represent egg buyers, and not egg providers.

Until more studies are undertaken and the health risks are better understood, no one considering being an egg donor can assess the risks involved and give consent that is truly informed. As a 24 year old, I was healthy, fit, and not at all focused on either the health risks, or the guilt and shame that I might experience afterwards. I would implore anyone who is considering being an egg donor not to do it. It's not worth it. I thought it would all be great, and didn’t have a clue how badly I could be taken advantage of.